The Trinidad scorpion pepper, this one is a mean customer

Earlier this week I said I was going to start a new feature on a singular ingredient, telling you a little bit about it and its uses. The reason I decided to do this is simple, people underestimate the ingredients they see every day in the shop, markets and cupboards. Learning a little bit about what your using can really make a difference to its applications in your cooking.

So first up, the chilli pepper. One of my favourite natural ingredients (garlic being another) and usually ends up in my sauces, salads, chopped up in wraps or sandwiches or scattered over the molten cheese of a pizza. I’m getting hungry just writing this! Here’s some interesting facts about the chilli.

What can I do with them though?

Everybody knows you can cut them up and put them in chilli’s or curries, that’s a great application for them as they have become a staple in the countries of those dishes origin. But how about getting a little more creative with it? Try these quick little ideas sometime or simply use them to inspire your own creations. these are just a few of my favourites.

This works great for a BBQ or even a dip for a Saturday night in watching a movie or some really bad TV. Very warming on a winters eve but equally inviting in the heat of summer. perfect.

Are they good for me?

Red chilies contain large amounts of vitamin C and small amounts of carotene. Yellow and especially green chilies (which are essentially unripe fruit) contain a lower amount of both. In addition, peppers are a good source of most B vitamins. So in short, yes. they are. They are also said to kick start your metabolic rate, which could help fat burning.

Hottest chilli out there?

They’re measured by something called the scoville scale.  check it out below 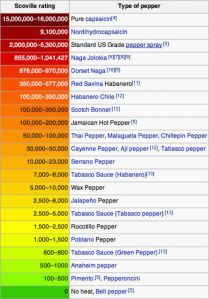 Now that’s a little snippet of what the chilli is all about and how you can use it, next time you get chance jump in your kitchen and use it in something new. Throw them in an omelette or through some noodles or salad. They’re really versatile, and add a third dimension to many a dish. Don’t be scared, get cooking!