Travel broadens the mind. Travel provides us with the opportunity to see, hear and most importantly eat things that we wouldn’t be able to experience at home, making it as far as I’m concerned a very important part of life. So why is it then that I have not been abroad since I was 12? The simple answer being I am terrified of flying and cannot bare the thought of getting on one of those tubular winged terror machines.

Luckily France is not too far away and a ferry can get me there in no more than a few hours dependent on which port you arrive at. Huzzah! And I must say that driving off the ferry and onto the somewhat alien road system was an interesting experience but one that now seems like easy work after staying there for just shy of two weeks. We stayed in a small town called Moyaux, not too far from Lisieux in Normandy, on a a site called Le Colombier which was situated on an old apple orchard. The French countryside provides a really lovely base of operations for an exploration of the north western part of the country and Normandy provides a brilliant source of local produce to explore. Moyaux is a small town or even a village that doesn’t seem to have a lot going on in it but provides a true look into how French people really live, as opposed to a place that is hopped up and bloated to keep up with a bloated feeling tourism demand that pushes it’s inherent “Frenchness” onto the back burner to conform to what people want to see. It represents quintessential Normandy life and is a place build around its Church where everything closes from around 12pm until at least 2pm. For help with the mental image see the village in the film ‘Chocolat’ but without the pouting, pony tailed and guitar brandishing Johnny Depp and replaced with a fairly average looking food blogger in a Vauxhall Astra.

There were a few things that really stood out to me that seemed to represent the produce of the area that included but were not limited to; apples, which they used to create tarts, ciders and a distilled cider brandy called Calvados.  The local cheese’s and dairy produce such as the thick and rich creme fraiche, camembert which is said to have originated in Normandy in 1791, Pont-l’Eveque which is very much like a squared brie which I find slightly firmer and Neufchâtel which boasts a smooth, creamy texture with a flavour that lands somewhere between a young and fairly well aged taste. It is certainly a region worth visiting for the cheese-o-philes among us, great with fresh bread and a selection of cured meats that are not so good for the waistline but extraordinarily super for the soul!

Lisieux offers a market on a Saturday that really doesn’t seem to hold anything that special when walking into it from the side of the Basilique where we parked, as it seemed to just be full of clothing and cheap watches which tend to not really interest me if I am really honest. However when you turn the corner just to the left of the library you see just what you need to see in France. Wall to wall food. Vegetables, fruit, seafood (Not a cloudy fish eye in sight) including some lovely Moule/mussels that we enjoyed that night in a paella, fresh crepes, bread, some awesome fresh, cured and very living meats, preserves and pretty much anything you could think of that you would want to see in France when looking for a feed.

I wandered around for a few hours in awe of just how good it was and feeling very lucky to be able to see it frankly as at the time we visited the farmers of France were on strike in relation to the price of meat and milk being paid to them by the large supermarket chains. I had heard about the French supermarkets as something to behold in comparison to what we have in the UK and unfortunately it took a few days for us to get to the closest one due to the roads being closed due to farmers parking their tractors all around the hypermarket. We got around to it somehow one day before the strike moved on to Le Havre and found burning piles of cow feces, agricultural waste strewn all over the place and angry farm workers waving us off the exits which led to the store. An interesting experience to be in but if I am honest I totally support their cause and wish them luck in their endeavor’s, farms work damn hard to keep up with supply in countries all over the world and they deserve to be fairly reimbursed for their incredible amount of hard work.

Drink. Something that you need to cover when giving a run down of Normandy it seems as they are famous for their production of Calvados brandy, which is a really smooth drink for even me who is not in any way shape or form a Brandy drinker. It is actually very good when added to fried onions and put on top of a heftily loaded burger, however that is an expensive and wasteful practice to a true connoisseur! I basically lived off Grimbergen while I stayed there which seems to be a staple beer in France, It is available in some really tasty varieties such as poire/pear, kriek/berry, ruby, blonde and white to name a few that I can remember.

In summary, France offered some incredible experiences and I can’t wait to go back again. While there we visited the Bayaux tapestry, the landing beaches, Monet’s garden and the camp site was a wonderful place to relax offering a lovely little creperie just past the pool that offered take away food which I have to be honest, wasn’t perfect but it certainly filled a void if needed (heres to you Croque monsieur). Normandy is somewhere that I would recommend visiting to any person who loves food, drink and culture to visit as it has all three categories covered in droves, just don’t be scared to run off the beaten track and go somewhere other than the hypermarkets as Normandy in particular has so much to offer to reward your exploration. So if travel really does broaden the mind, consider my mind broadened.

A lovely fountain in Bayaux 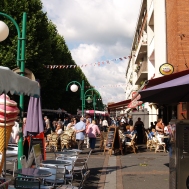 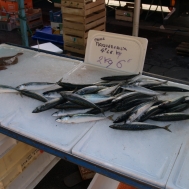 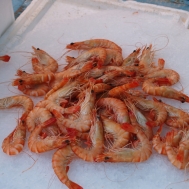 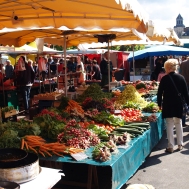 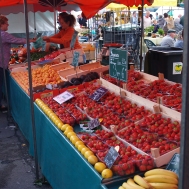 Freshest chicken you can buy

Freshest chicken you can buy 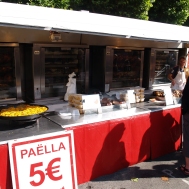 Not many empty stomachs in Lisieux on a Saturday 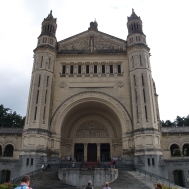 The Basilique is something to behold. An Incredible building!